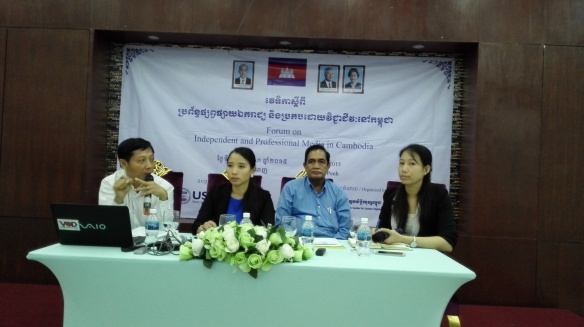 Last Saturday, Cambodia commemorated the seven year anniversary of the killing of Khim Sambo and his 21-year-old son Khat Sarinpheata. They were both shot on 11 July 2008 by two unidentified men near the Olympic stadium in Phnom Penh, after they had finished exercising. Khim Sambo died on the scene while his son succumbed to his injuries the following day at the hospital.

Khim Sambo, 47, was an opposition journalist who had been working since 1997 for the Moneakseka Khmer, a Khmer newspaper aligned with the opposition leader Sam Rainsy. He had frequently wrote about allegations of corruption among the members of the government and was heavily critical towards Hun Sen and the ruling Cambodian People’s Party.

The killing happened less than two weeks before Cambodia’s National Assembly election and after Khim Sambo criticized high ranking officials in the ruling party; the timing of his murder suggested possible political motives. A month before Khim Sambo’s murder, the Moneakseka Khmer’s editor and candidate to the national election for the then opposition Sam Rainsy Party, Dam Sith, had been arrested after the newspaper raised concerns over the role of the minister of foreign affairs during the Democratic Kampuchea.

Unfortunately, Khim Sambo’s case is not isolated. Such killings have increased over the past years. Since 1994, at least 13 journalists have been killed. A large majority of the killings has remained unpunished. For example, to date, no one has been held accountable for Khim Sambo’s killing, despite national and international civil society organizations repeatedly called for the establishment of an independent commission of enquiry. In the same vein, following the 2012 killing of Serei Oudom, a journalist reporting for Virakchun Khmer Daily, judicial authorities reportedly refused to carry out thorough investigations. Speaking in the Phnom Penh Post, Shawn Crispin, Senior Southeast Asia Representative of the New York-based Committee to Protect Journalist, commented that “Cambodia has an impunity problem, one that has intensified in recent years with the unresolved killing of political and environmental journalists”.

Allegations of restrictions over the media are nothing new. Whilst already weakened, independent journalists in the country continue to be subject to censorship, threats, arrests and murders. Intimidations by powerful actors also remain widespread, preventing journalists from carrying out their pivotal role in strengthening democracy and public debate. This is particularly true concerning those who are not affiliated to the government or the ruling party, which owns and controls most of the media.

Similarly, media’s freedom of expression is undermined by provisions contained in the Press Law 1995 which criminalize contents that may affect “national security and political stability” (article 12), “the good customs of society” (article 14), or that “humiliates or contents national institutions” (article 13). Such formulations result in a large scope of the incrimination offering to the authorities the possibility to intimidate and prosecute dissident voices while exercising their fundamental freedom of expression.

Pursuant to its international legal obligations, the Royal Government of Cambodia shall take genuine steps to uphold media freedom, so allowing journalists to safely work and express views thoroughly, freely and independently. Unfortunately, last year, following its second Universal Periodic Review, the Royal Government of Cambodia rejected four recommendations including one aiming at strengthening media’s freedom and independence. The said recommendation required Cambodia to abrogate legal provisions contained in the Penal Code and in the Press law relating to defamation and publication of false information. Most recently, the Human Rights Committee also encouraged Cambodia to decriminalize defamation and to bring other provisions impacting the freedom of expression into line with international standards.

Outside the anniversary of Khim Sambo’s killing, CCHR wish to express its solidarity with journalists who despite being threaten in their everyday life continue to report independent news in Cambodia so enabling citizens to make informed choices and participate in public life.