The women of Boeung Kak Lake protest the destruction of their homes in 2012 (pictured centre: famous land activist Tep Vanny)

Reflecting on International Women’s Day, CCHR looks at the Cambodian women who are challenging gender norms by fighting for their rights

In every facet of society, women across the world continue to possess fewer advantages while enduring greater threats to their safety and well-being. The abuse of women’s rights is considered by some as the concern of women, and women alone. This is not a ‘women’s issue’, it is a human rights issue.[1] In Cambodia, the simple act of a woman speaking out can be seen as defiant and abhorrent. Nevertheless, brave female activists are raising their voices amidst ongoing attempts from the authorities to silence them. As people held flash-mobs to raise awareness of women’s rights ahead of International Women’s Day, events planned by civil society groups to encourage and empower women in prison had to be cancelled due to new restrictions.

Women’s rights in Cambodia are protected in the Constitution and various domestic laws, as well as international human rights treaties.[2] However, legal provisions mean little without enforcement. Women continue to face discrimination based on negative social expectations and stereotypes that link them to home and child care, while also forcing many to generate income due to the family’s financial situations. These ‘invisible norms’ are enforced not only by men enjoying their own ‘gender privilege’, but by women who underestimate their own abilities. So ingrained are notions that women should be punished, should never defend themselves or exist outside of stifling gender roles, that a study by the UN found that Cambodian women not only believe that there are times that women deserve to be beaten by men, but these beliefs of deserved punishment were more prevalent among women than men.

“the women of Cambodia are fighting back”

It is within this environment of abuse that the women of Cambodia are fighting back. The women of Boeung Kak Lake have undergone a stream of indignities since the lake that used to dominate their neighbourhood in Phnom Penh was filled with sand in 2010, amid forced evictions and devastating floods. Since then, they have vehemently protested the destruction of their homes. They have marched in the streets and outside parliament, despite illness or age and ignoring the risk of beatings or arrest. Their campaign has become internationally renowned for their advocacy methods, eschewing the company and methods of their male counterparts in favour of non-violent protest.

Despite this, in November 2014 7 of the women and 1 monk were arrested for protesting in front of the Phnom Penh city hall. They were charged and sentenced within 24 hours, and when other community members protested this, 3 of them were also arrested.[3] At the same time in another area of Phnom Penh, 2 members of a family fighting for their land rights were also arrested, but while the father was released shortly after, his daughter remains in prison. The proceedings for all 11 women and 1 monk failed to recognize fair trial rights, and ignored their fundamental freedoms to expression, assembly and protest. 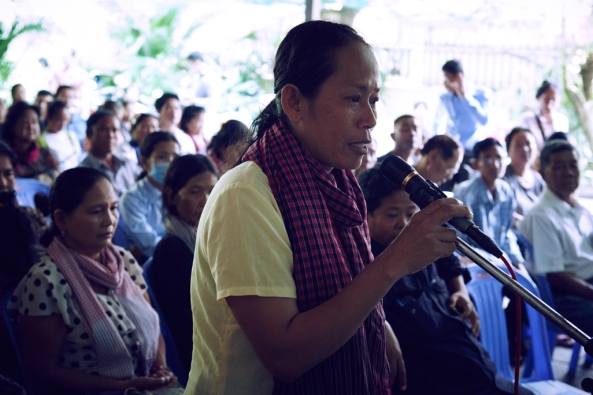 The Cambodian Centre for Human Rights has recently launched a campaign in light of International Women’s Day to highlight the vulnerable nature of the 11 women, and call for the release of all 12 detainees. Far from silencing the 11 women or the community, these arrests have raised awareness of these human rights issues and made the women’s voices heard across Cambodia and the globe. At the campaign launch, members of the community, friends and supporters came to share stories and words of encouragement. CCHR’s Executive Director Chak Sopheap called for the release of the 12 from prison, and for the government to protect the rights of its citizens.

“home and land is our life. If we have no land, how do we live?”- community activist Morm Chhuneang

The launch was at once a celebration of the power of community and of the strength of women. One 12-year-old girl told the crowd that she missed her mother, and that with an absent father she could not afford to go to school. She was dwarfed by the large screen behind her and surrounded by onlooking adults, but with a slightly wavering voice, bravely announced that she was going to “stand up and fight for my mother.”

“I will stand up and fight for my mother”

Another community member and activist, Morm Chhuneang, has attended almost every Boeung Kak protest but claims to have evaded arrest by ‘being quieter’ than the others. For Morm, the issue is visceral, something she wants to talk about but feels she cannot fully express. The situation of poverty she finds herself in while her friends endure prison, all because of a corrupt system and woefully inadequate compensation offers, she says is worse than what she suffered under the Khmer Rouge. Her life cannot move forward because “home and land is our life. If we have no land, how do we live?”

The women of Boeung Kak show enormous strength in raising their voices for their homes and their community, and it is time those in power listened.

UN Women- Asia Pacific, ‘Why Do Some Men Use Violence Against Women And How Can We Prevent It?’ Study (September 2013) <http://unwomen-asiapacific.org/docs/WhyDoSomeMenUseViolenceAgainstWomen_P4P_Report.pdf&gt;.

To read more about the issue of land rights in Cambodia, please see:

[1] For a background on the awareness of women’s rights as human rights, see the dedicated Amnesty International portal at <http://www.amnestyusa.org/our-work/issues/women-s-rights&gt;.

[2] Cambodia is party to the International Covenant on Civil and Political Rights (“ICCPR”) and the Convention on the Elimination of All Forms of Discrimination Against Women (“CEDAW”), both of which protect against gender-based discrimination.